Where the wild things roam At the cusp of Australia’s north eastern coast lie swathes of ancient, emerald green, tropical rainforests, yearning towards the skies.

I’m standing under a canopy of palpable leafy loveliness, looking skywards, when the unthinkable happens. A single sliver of sunlight pierces through the hushed thicket, glistening on the boardwalk in front of me, a miracle in this ancient, impenetrable woodland, one of the most primitive in the world. Barely a single percentile of light filters through the closed canopy: it’s a landscape where all inhabitants yearn for the sun. 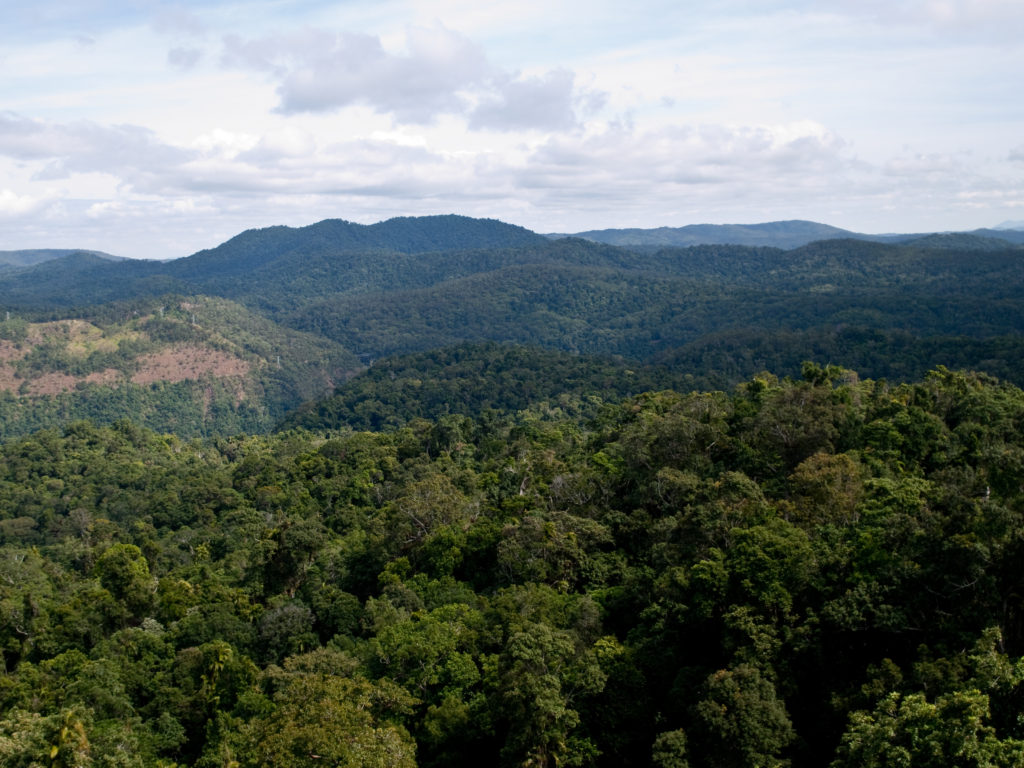 I’ve just hopped midway off the Skyrail Rainforest Cableway, a gondola ride that meanders over 7.5 kilometres of the Barron Gorge National Park, a scenery etched by misty waterfalls, rugged ravines and sweeping coastal mountains. The national park is part of the Wet Tropics of Australia’s Queensland, a World Heritage Site – lush 450 kilometres of tropical rainforests. The evolutionary process dates back to many million years; but fifteen million years ago, the Australian and Asian continental plates collided. In this terrestrial bump, a uniquely wondrous world of woodlands with quirky inhabitants was born. 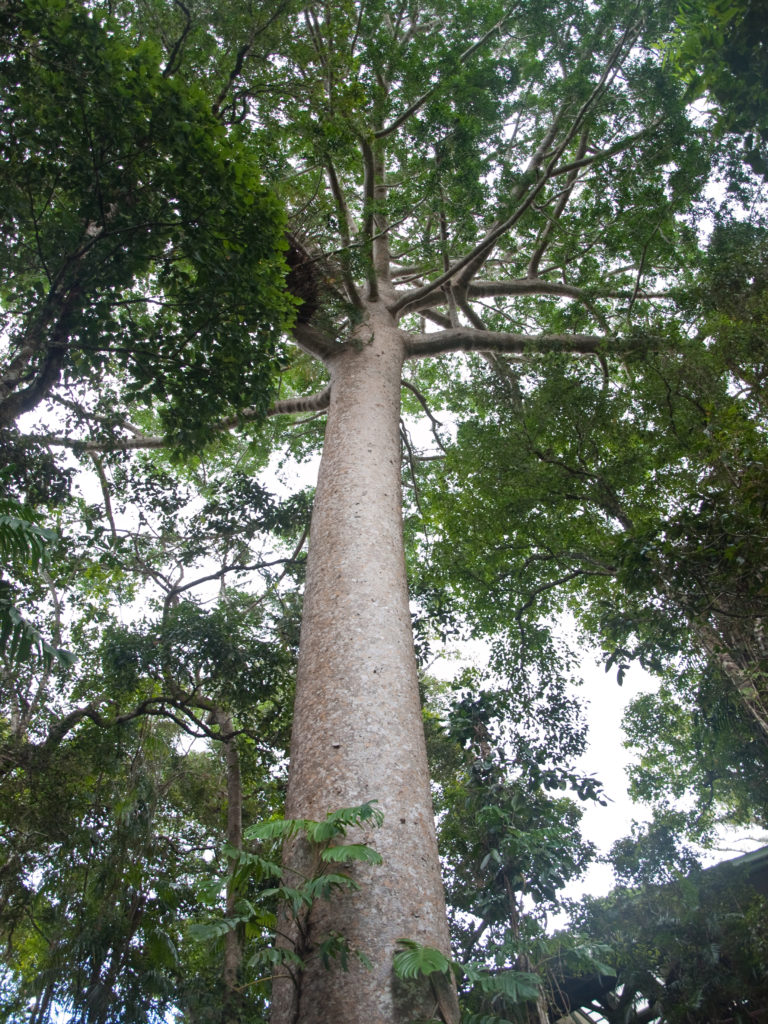 Mike, the skinny park ranger, is taking me for a clomp around the steamy green timberland on the Red Peak Station boardwalk. The pathway is busy with scuttling bugs, and the occasional, turquoise blue Ulysses butterfly flutters past us. I hurry behind Mike; my ears perked to the sound of the ancient woodlands, a low deep hum as old as time, of the verdant dome’s hidden dwellers. 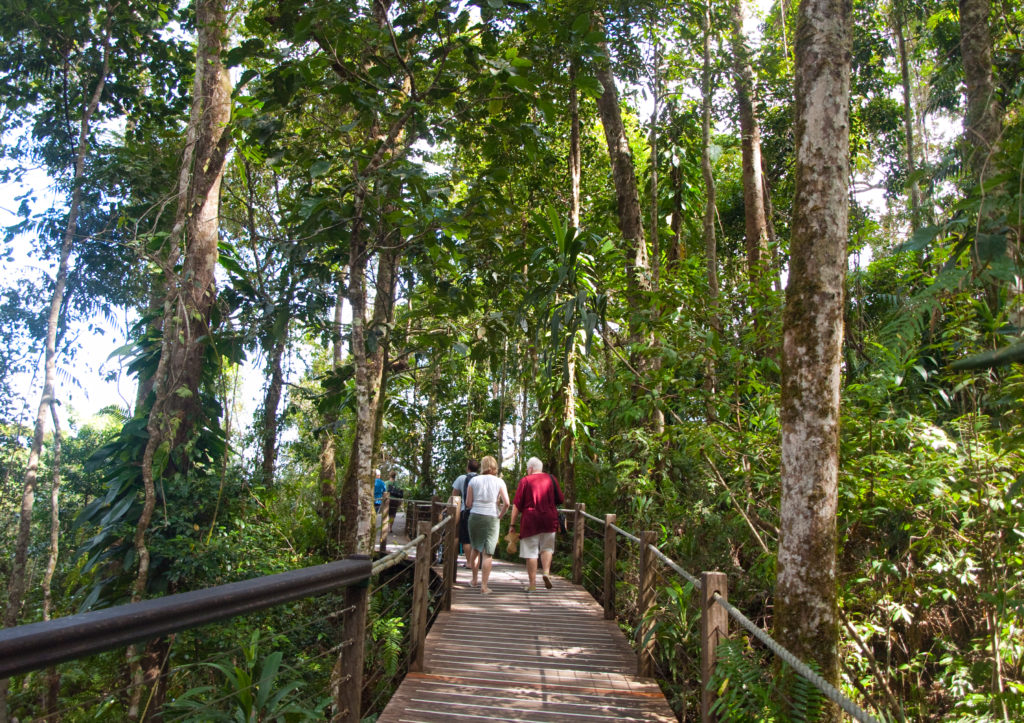 Straining my neck upwards, I squint at a 400 year-old Kauri pine with a giant mop like top. Pushing past the layered roof of trees, it’s muscled its way towards the sky, soaring meters over us mortals in search of sunlight. The Kauri’s bark is naked, smooth, and bare of branches; its trunk is thick as a pachyderm’s torso. “A dwarf,” says Mike, dismissing this fine specimen, as he regales tales of the symbiotic connection between the natives and nature. The aboriginals tapped the natural resources of the woods for bush tucker medicine. Pointing at yellow sap oozing out of a tree bark, he tells me it acts as the natural band-aid of the forest. A little bit of the goo seals any cut, but it takes a solvent to wash it off from your hands! 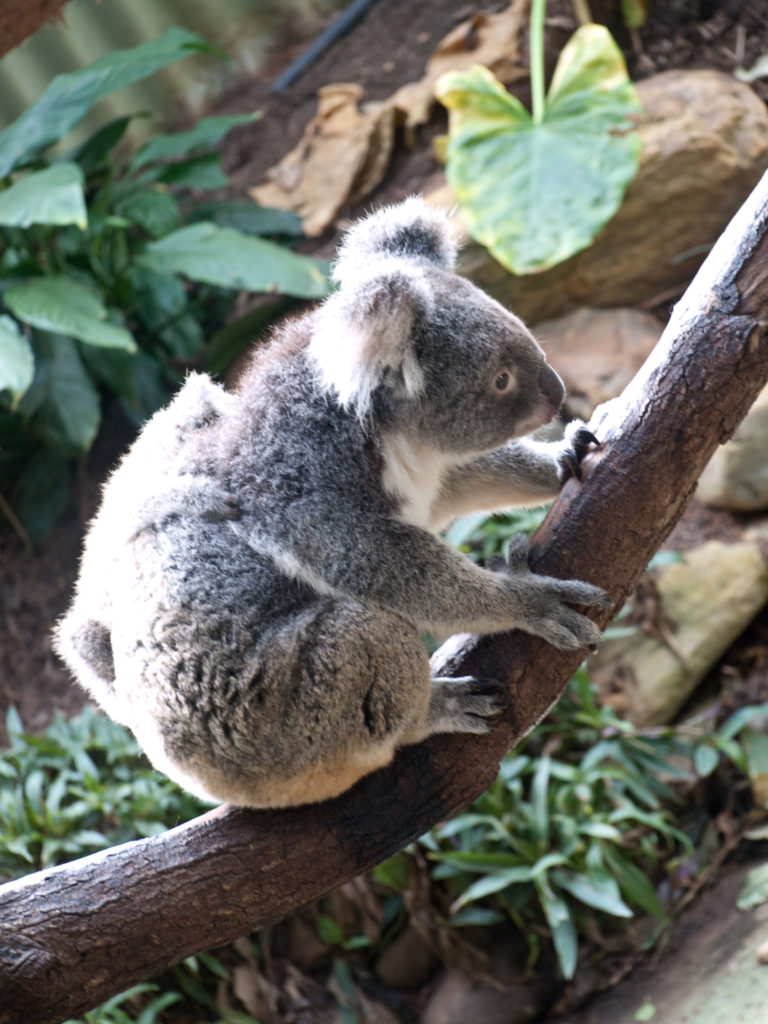 The vocabulary of the woodlands is distinct. A hairy spider spins its web between clumps of squat ferns as Mike points out epiphytes, opportunistic plants perched high up on trees so they can wrangle their share of sunlight, but are not parasites. I look at a profusion of basket ferns, their upturned, cavernous tendrils like open bowls ready to receive supper: discarded snake skins, bird droppings and old leaves, composted by rain into a delicious, mile high meal. 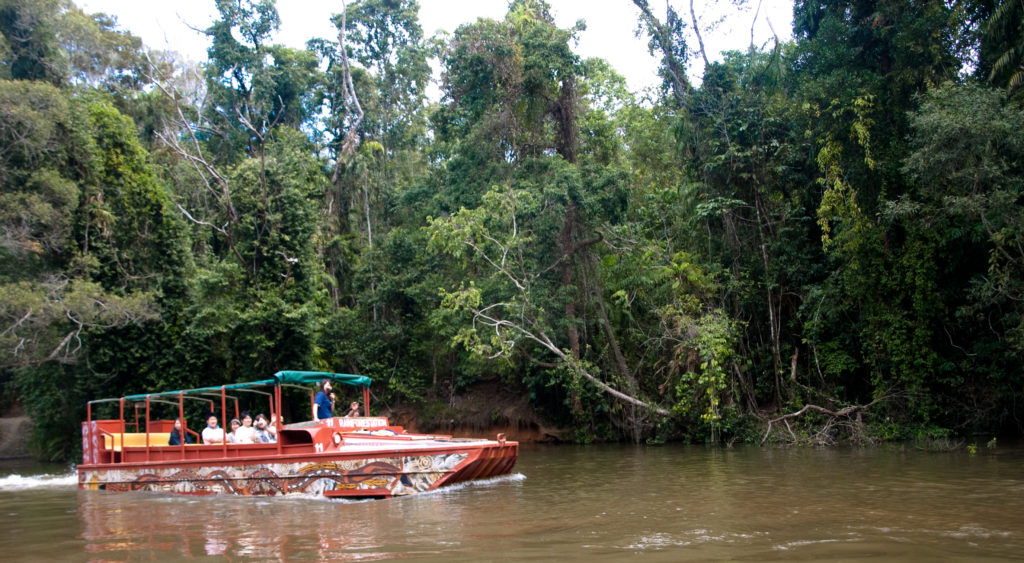 But it’s at the Rainforestation Nature Park that I get up close and personal with wilderness. Trundling along in an amphibious World War II Army Duck on a rainforest tour, the Duck Captain shows me an appropriately named Lawyer Vine, a dangerously spiky vine with a cheeky nickname, wait-a-while, which clings on to you, holding you back for dear life. He manoeuvres us past clumps of stinging nettles, paddling through water and squeezing through the bush. 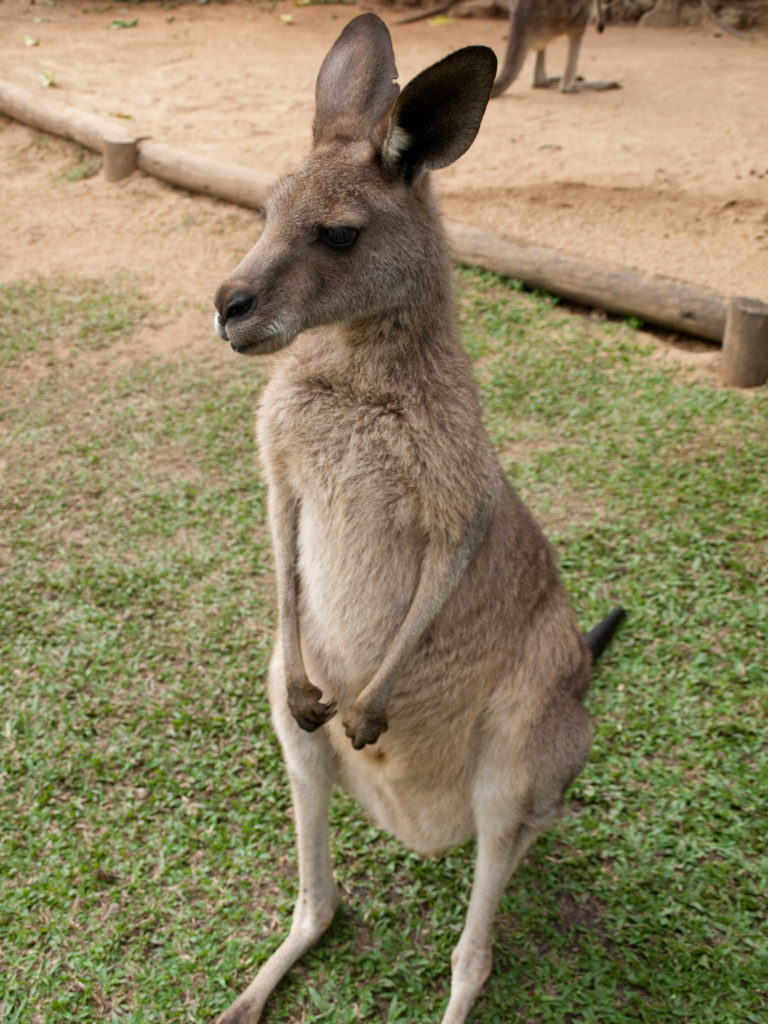 It isn’t only wilderness in kissing distance, but marsupials and others too, curious inhabitants of the rainforest: cuddly Koalas – Matilda and her tiny clingy Joey with mournful eyes; wily estuarine crocodiles floating comatose on still waters; and a slothful wombat, nose buried deep in its feed, in the Koala & Wildlife Park. A posse of friendly kangaroos surround me, eating from my hand, when, from afar, I hear the guttural intonation of the didgeridoo, droning and squalling, an intimate yet mystical sound. Walking towards it, I reach a small clearing where male dancers from the indigenous Pamagirri Tribe shimmy to primal sounds: Ngukum – swatting mosquitoes with leaves and the Bundara – a jig of the cassowary, a flightless, double-wattled bird from the rainforest, deep, captivating rhythms that stay with you long after the last notes wane. 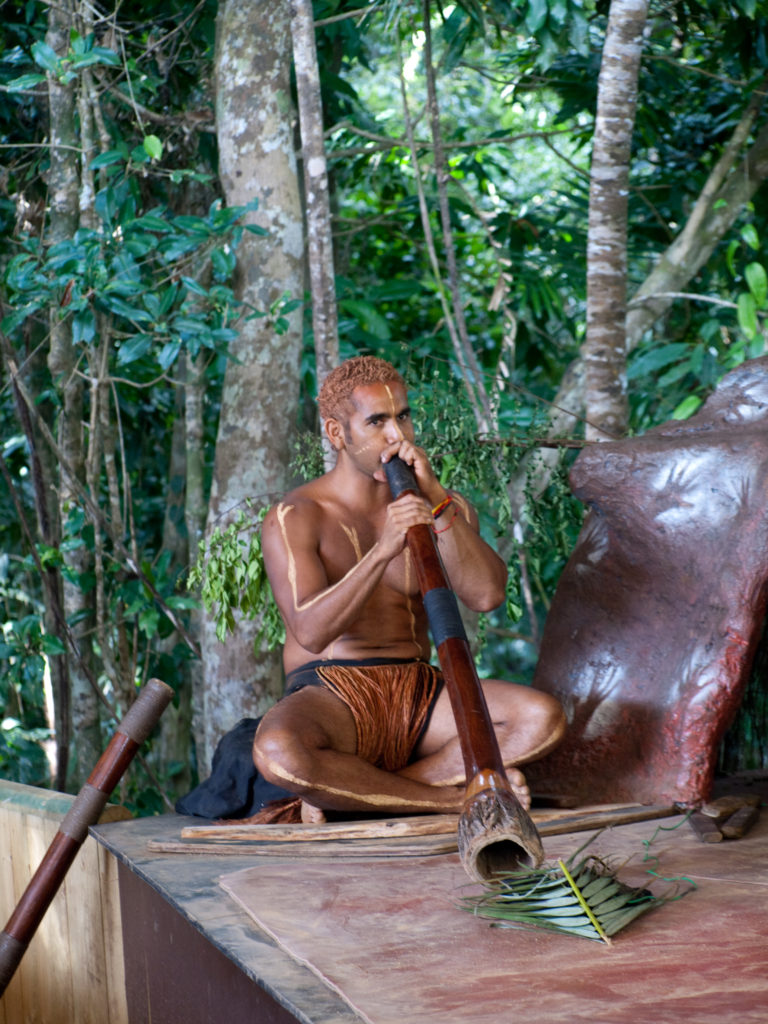 As the sound of the didgeridoo fades away, I take a magical railroad ride back to Cairns on the Kuranda Scenic Railway, built in the late 1800s. Its carriages are hand-painted with the legend of Buda-dji, the Carpet Snake. Over a glass of sparkling wine and a plateful of cheese, we slice through dense foliage and rumble over steep cliffs, zip through tunnels, with a brief halt at the mighty waterfalls that tumble into the Barron Gorge. Gently, the railway clatters to a halt at the Freshwater Connection Station, replete with a restaurant built of old carriages and a tiny museum.

Just then a sylvan breeze blows, and, a single leaf wedged into the train’s window flutters on to the platform – an ancient, natural relic from a magical realm, bringing a bit of itself into a modern, concrete world.

This exploration of Queensland appeared in Jet Wings.